Yvonne Roussey was born on 1 May 1913 in Ban-de-Sapt, Vosges, Grand Est, France. She began to work at the age of 12. She never married or had children.

Roussey kept on working all her life, in a grocery: she did cleaning, took care of the garden, managed the restaurant and the bar, do the shopping, did tedding and other tasks: in short, she worked hard.

In May 2020, Roussey celebrated her 107th birthday. At an undetermined date during the coronavirus pandemic, Roussey had fever and contracted COVID-19. According to her doctor, she didn't need oxygen and was closely watched by the staff of the nursing home. As of October 2020, she has succesfully recovored, but was more tired and hard of hearing than before. 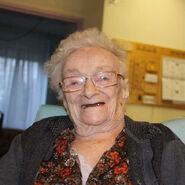 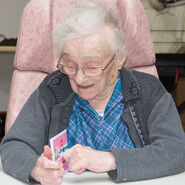 Retrieved from "https://gerontology.wikia.org/wiki/Yvonne_Roussey?oldid=173227"
Community content is available under CC-BY-SA unless otherwise noted.