Furuya was born in Japan on 28 June 1899. At the age of 109, she lived at the Wakasa Heights Day Service Center (Japanese: 若狭ハイツデイサービスセンター) in Anojiri, Obama. 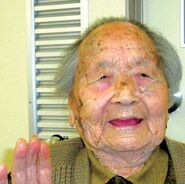 Retrieved from "https://gerontology.wikia.org/wiki/Yoshi_Furuya?oldid=164318"
Community content is available under CC-BY-SA unless otherwise noted.