Mizuno was born in Yaotsu, Gifu Prefecture, Japan, on 7 December 1903. At the end of her life, she lived in Honmachi, Tajimi. On 7 February 2013, following the death of 109-year-old Yasu Ogiso, Mizuno became the oldest living person in Gifu Prefecture.

Mizuno died of acute respiratory failure at the Gifu Prefectural Tajimi Hospital in Maebatacho, Tajimi City, Gifu Prefecture, Japan, at 06:30 PM on 22 January 2014, at the age of 110 years, 46 days. 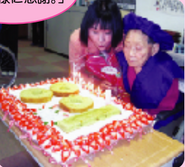 Undated.
Add a photo to this gallery

Retrieved from "https://gerontology.wikia.org/wiki/Yasue_Mizuno?oldid=172374"
Community content is available under CC-BY-SA unless otherwise noted.