Yang Suying [Traditional Chinese: 楊素英] (25 March 1908? – fl.14 May 2018) was a Chinese supercentenarian whose age is currently unvalidated by the Gerontology Research Group (GRG).

Yang Suying claimed to have been born in Chaizui Village, Taiping City, Teng County, Wuzhou, Guangxi, China on 25 March 1908. She was the only girl of her parents' six children. She had an older brother and six younger brothers, all deceased as of 2017.

Yang married in Qizheng Village, and had a son and a daughter. Her husband died, and she remarried in Luoshe Village, giving birth to two other sons. Her only daughter married in Pingnan County, Guigang, Guangxi. One of her three sons is dead as of 2017, and the younger one (in his 60s in 2017) never married and stay living with his mother.

In 2016, Yang was still able to move freely, to pick firewood in the mountain, and to go through the village in a van. In September 2016, Yang fell, and though her physical shape hasn't been altered much (she sometimes has pins and needles in thighs), her memory deteriorated.

In August 2017, she was visited by some internauts. She lived in a cement-made bungalow of one floor with her younger son, and was at the time reported to be the oldest living person in Taiping City. She celebrated her 110th birthday in March 2018. Because she hadn't teeth anymore, she eats rice mush and mussels.

In May 2018, before the Mother's Day (celebrated the second Sunday of May in China), Yang was again visited by internauts and by her family. The Taiping Running Associations offered her red envelopes. Yang also gave biscuits to her descendants. 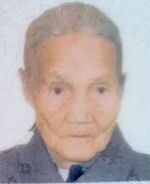 Yang Suying as an older woman (on her ID card).

Retrieved from "https://gerontology.wikia.org/wiki/Yang_Suying?oldid=172789"
Community content is available under CC-BY-SA unless otherwise noted.