Alfred William Frankland, MBE (19 March 1912 – 2 April 2020)[1] was a British allergist and immunologist[2] whose achievements included the popularisation of the pollen count as a piece of weather-related information to the British public, and the prediction of increased levels of allergy to penicillin. He continued to work for a number of years after turning 100.[3]

Frankland was born in Battle, Sussex, England, to Rev. Henry Frankland, of North Yorkshire farming stock. At the time of his son's birth, he was curate of St Mark's, Little Common, near Bexhill-on-Sea, East Sussex, in later years a vicar in Cumberland. His mother, Alice (Rose), was the daughter of Henry West, a successful ironmonger of Barnsley.[4][3] He was born an identical twin; his brother (the elder twin by fifteen minutes), Rev. John Ashlin Frankland, who worked in Sierra Leone in the 1950s,[4][5] died in 1995 at age 83. They had an elder brother, Basil, who entered the fur trade in Canada, and an elder sister, Ella, who died aged 22 in 1933.[4][6] Frankland reported that the family doctor was ineffective, and this motivated him to do better himself.[2]

Frankland spent the war years 1939–45 in the Royal Army Medical Corps; initially at the Tidworth Medical Hospital, he later joined the Royal Warwickshire Regiment.[7] In 1942, he was captured by the Japanese and held for three and a half years as a prisoner of war (POW) in Singapore. He would later recall: "Medically, as a prisoner of war, we saw conditions which are now unknown."[6] As a POW, he was forced to provide medical assistance for Japanese troops,[8] which Frankland believed saved his life.[9]

In 1946, Frankland began full-time work in the allergy department of St Mary's Hospital, London.[6] He and his colleagues undertook a series of trials of between 25,000 and 30,000 patients,[6] which proved that antihistamine tablets neither reduced nor increased the incidence of pollen asthma. Frankland continued to contribute articles to academic journals beyond his official retirement and then his 100th birthday.[2]

Frankland believed that the rise in allergies results from increased cleanliness and the levels of hygiene in modern life—the so-called hygiene hypothesis. He has said that "We don't set off our immune system early on, we are too clean. In the former East Germany for instance, with very poor work and housing conditions, people were less allergic."[6]

Frankland was keen to provide patients he saw in London with information about pollens, such as the levels of pollen on any given day, and the times of the year when levels would tend to be at their highest. St Mary's Hospital employed a botanist to assist with collecting this information, and to complement the work on pollen counts already being measured in Cardiff. Weekly London pollen counts were sent to members of the British Allergy Society from 1953 and shared publicly, via The Times and The Daily Telegraph, from 1963.[10]

Frankland was also a supporter of the idea of desensitisation, a technique that aims to reduce the level of immune response to allergens by repeated low doses of the substance to which the patient has an allergy. In 1955, Frankland experimented on himself by being bitten each day by the blood-sucking insect Rhodnius prolixus. He was assisted in this work by the London School of Hygiene & Tropical Medicine, which was able to supply insects that Frankland could be sure he had never previously been exposed to. The bites eventually provoked a severe anaphylactic reaction.[11]

During the 1950s, Frankland served as an assistant to Alexander Fleming in the development of penicillin. The two had a daily meeting, but due to Fleming's lack of interest in clinical medicine, Frankland said that he could not recall a patient ever being discussed.[12] Frankland and Fleming were also concerned with antimicrobial resistance to penicillin, with Frankland crediting Fleming with saying that careless prescription would inadvertently lead to "the death of man."[13]

In 1954, Frankland published "Prophylaxis of summer Hay-fever and Asthma." The article reported the results of a trial involving 200 patients with previous histories of grass pollen sensitivity half treated with active vaccines, and half with inactive 'control' vaccines.[14]

The results suggested that the active vaccines were much more effective in reducing allergy symptoms than the controls. The study was notable for being the first in the field which used randomised, controlled methods and a standardised approach to every patient.[15] The trial, along with his work on the pollen count, was one of the contributing factors to Frankland being awarded the EAACI Noon Award for significant contributions to immunotherapy.[16]

In 1979 Frankland treated Iraq's then-president Saddam Hussein. Contacted to visit a VIP in Baghdad having trouble with asthma, Frankland advised Hussein this was not the case and to give up his habit of 40 cigarettes a day. Frankland said that "To my lasting regret, I told him that was his trouble and that if he carried on, in another two years he wouldn't be head of state. I heard sometime later that he had had a disagreement with his secretary of state for health, so he took him outside and shot him. Maybe I was lucky."[17][18]

Frankland retired from his job at St Mary's Hospital aged 65, and was then offered an unpaid consultancy role in the Department of Medicine at Guy's Hospital. He worked at Guy's on this basis for another twenty years on peanut anaphylaxis and paediatric allergies. After retiring from Guy's he continued to participate in academic life by attending conferences and publishing articles in journals.[2]

In February 2012, Frankland appeared as an expert witness in a British court. The accused had claimed that a vehicle crash in which he was involved was caused by his losing control following a bee sting. Although Frankland agreed with the defence that such a scenario was possible, he gave an opinion that delayed-response reactions to bee stings only occurred after there had been initial symptoms following the sting. In this case, there had not been such symptoms, and the accused was found guilty.[19]

Frankland continued to publish; at age 100 he authored "100 years of allergen immunotherapy",[23] and most recently co-authored, "Flight Lieutenant Peach's observations on Burning Feet Syndrome in Far Eastern Prisoners of War 1942–45" in the journal QJM in 2016 (aged 104).[24]

Frankland was president of the Anaphylaxis Campaign, the UK charity for severe allergy issues.[6]

The William Frankland Award for Outstanding Services in the field of Clinical Allergy is awarded each year at the annual meeting of the British Society for Allergy & Clinical Immunology.[6] The allergy clinic at St Mary's Hospital is named in his honor.[28] 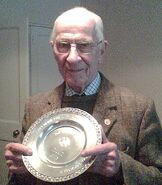 William Frankland in 2006
Add a photo to this gallery

Retrieved from "https://gerontology.wikia.org/wiki/William_Frankland?oldid=147724"
Community content is available under CC-BY-SA unless otherwise noted.