In May 2018, Wang was invited to watch an artistic show organized by several Jiaozuo insurance companies. In December 2018, she was named the oldest "National Healthy Elderly" for the second time.

Since at least 2019, Wang was reported to be the oldest living person in Jiaozuo. In October 2020, she was visited by Bo'ai County's governor Zhang Honwei [Chinese: 张红卫] and deputee-governor Ding Aixiang [Chinese: 丁艾香].

In April 2021, Wang celebrated her 114th birthday with her relatives. She was still able to walk with a cane. 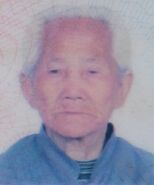 Wang Zhanwen as an older woman (on her ID Card).

Wang Zhanwen standing at the age of 114.

Wang Zhanwen at the age of 114, with her son Bi Shiguang.
Add a photo to this gallery

Retrieved from "https://gerontology.wikia.org/wiki/Wang_Zhanwen?oldid=171970"
Community content is available under CC-BY-SA unless otherwise noted.