Wally Baker was born in New Castle, Delaware, USA on 9 January 1898. She was the oldest person ever from Delaware. She resided at Parkview Nursing home and Rehabilitation Center in Wilmington, Delaware. One of eight children, longevity runs in the Stiefel family. Her brother John lived to be 99, her sister Seline lived to 95 and sisters Emma and Anna lived to be 102 and 105, respectively.[1][2][3] Wally Baker died in Wilmington, Delaware, USA on 8 April 2009 at the age of 111 years, 89 days.[4] Her son Eddie lived to 98. 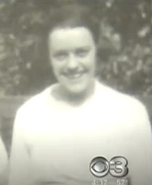