Virginia McLaurin (claims 12 March 1909?/may have been born 1916/1917) is an American supercentenarian claimant and activist who resides in Washington, D.C.

She came to Washington D.C. as part of the Great Migration. Her husband died in 1941 while serving in World War II. She volunteers forty hours a week as a Senior Corps volunteer with the United Planning Organization's Foster Grandparents Program at the Roots Public Charter School.

In her lifetime she remembers the introduction of electricity, the early Model T Fords being driven on the road, and was living in Washington, D.C., when Martin Luther King, Jr., was assassinated.

In 2013, McLaurin received a volunteer community service award from Mayor Vincent C. Gray in recognition of her voluntary work.

In 2014, thanks to a campaign by the Latino Economic Development Center (LEDC), a TV crew publicized the fact that her apartment was infested with bed bugs. A local pest control company got rid of the infestation and gave her a free bed. Her landlord also arranged for her apartment to be redecorated.

She gained national attention after a visit to the White House on 18 February 2016 to celebrate Black History Month, after which a video of her dancing with President Barack Obama and First Lady Michelle Obama went viral on social media. She celebrated her 108th birthday with the Harlem Globetrotters.

At the beginning of April 2016, thanks to many donations from the general public, McLaurin moved into her new apartment close to her church and the school where she is a volunteer. On 27 May 2016, she attended a Washington Nationals baseball game and was presented with a custom jersey on the field.

On 8 November 2016, McLaurin voted on Election Day. She urged others to vote, as well, stating, "If you have to crawl to go to the poll, then vote." 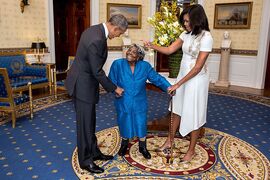 McLaurin at 106, (center) meets with former president Barack Obama and wife first lady Michelle Obama, in the Blue Room of The White House February 2016.
Add a photo to this gallery

Retrieved from "https://gerontology.wikia.org/wiki/Virginia_McLaurin?oldid=118903"
Community content is available under CC-BY-SA unless otherwise noted.