Vasiliki (Kitsa) Athyridi-Avaropoulou was born in Thessaloniki, Ottoman Empire (now Greece) on 29 August 1911. When she was born, Thessaloniki, was still part of the Ottoman Empire. In October 1912 the greek army entered in the city and her mother took her with a flag to welcome the soldiers. Her family had friendly relations with the founder of newspaper "Macedonia", Konstantinos Vellidis. The family lived initially in Apellou and later in the area of the Hippodrome, between Muslims and Jews. Mrs Vasiliki remembers "The Turkish grocer gave us balls to play. My mom, Antigone, hung out with the Turkish women, she also learned Turkish. They gave her fresh eggs for us who were babies. In 1921 we went to a house on Miaouli Street, there lived Jews and we hung out with Jewish girls. They knew French, I was going to the French school and that's how we became friends ". She also remembers the Great Thessaloniki Fire of 1917, as she was nearly six years old back then. The fire destroyed the distillery of the Avaropoulos family.

Her father, Efstratios Avaropoulos, was born in Aretsou, Asia Minor and settled in Thessaloniki in 1905, to open a branch of the family-owned distillery in Istanbul. After the Asia Minor catastrophe, her mother went down to the port every day and helped the refugee families who arrived in Thessaloniki to settle in the houses left behind by the Turks who left the city, while she had turned the first floor of her own house into a refugee hostel.

When the Greek-Italian War started, her husband went to fight. Vasiliki enlisted in the "Friends of the Army" and was going in different neighborhoods, recording the needs of the families left behind by the soldiers who fought in Albania. Later, during the nazi occupation, Her house in the countryside was ordered by the Germans to be used as a hospital.

In the beggining of Autumn 1944, shortly before the departure of the Germans the attitude of Nazi conquerors had hardened greatly and they threatened with death anyone who hid Jews. However, Athyridis' family, hid a Jewish friend, his wife and their three children. For this act, she received in 2017, aged 106, the title of "Righteous among the Nations" by Yad Vashem, the World Holocaust Remembrance Center. 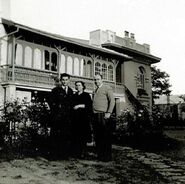 Vasiliki with her son Grigoris and her daughter in 1941 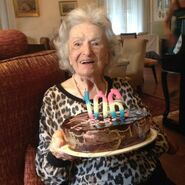 In November 2017 she receives the title of "Righteous Among the Nations" by the Counselor of the Embassy of Israel in Athens. Next to her, her grandson Kostas Athiridis.