Valentina Martin Gimenez (14 February 1908 – 13 April 2020) was a Spanish supercentenarian whose age is currently unvalidated by the Gerontology Research Group (GRG). She may be the last Spanish person born in 1908. She was the first known supercentenarian victim of COVID-19.

Valentina was born in Zapardiel de la Canada, Avila, Castile and Leon, Spain on 14 February 1908, that is the Valentine's day, from which she took the name.

Since she was young, Valentina has dedicated herself to the family and work in the fields. Her passion for dance gave her the opportunity, as a young woman, to meet the man who she would later marry.

At the time of her death, Martin Gimenez lived with her daughter in the senior center, called Sarquavitae Rosario, in Torres de la Alameda.

She died in Torres de la Alameda, Community of Madrid, Spain, on 13 April 2020, at the age of 112. It has been reported that she died as a result of contracting the COVID-19 virus. 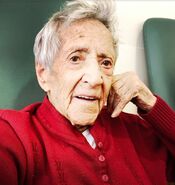