Ulla Lund (née Vistisen) (25 July 1907 – 23 August 2017) was a Danish-American supercentenarian whose age is currently unvalidated by the Gerontology Research Group (GRG). She was the oldest known person in Massachusetts, USA, when she died.

Ulla Valborg Vistisen was born in Sparkaer, near Viborg, Midtjylland, Denmark, on 25 July 1907. Her parents were Knud and Anine (née Pedersen) Vistisen. She was the third of the couple's eight children. Her favourite childhood memories include her father's spurs scraping against the stairs, her mother making her clothes and cooking fantastic meals, and singing carols around the Christmas tree with her family.

In 1924, at the age of 16, Ulla went to a party and met her future husband, Svend Lund, and fell in love with him the moment she saw him. Svend emigrated to Boston, Massachusetts in 1925, and Ulla followed shortly after. Svend and Ulla married in 1927 and had a son, Peter, in 1937.

Ulla became an official U.S. citizen in 1930, and voted in every US presidential election since 1932. She returned to Denmark with her husband in 1936 and her son in 1950. For many years, Svend and Ulla rented an apartment until they moved to Lexington, Massachusetts.

In 1942, after learning through the Red Cross that her family back in Denmark were safe during World War 2, Ulla began volunteering as a blood donor to thank the Red Cross for what they'd done. During the Depression, her husband Svend went from house to house to clean gutters. He passed away in 1976 of cancer after 49 years of marriage.

At the age of 103, Ulla moved into Meadow Green Rehabilitation and Nursing Centre in Waltham, Massachusetts, as per the advice of her physician. She enjoyed doing crossword puzzles with her son Peter, who says she usually beat him. Peter also said that Ulla used to bake more than 500 Danish cookies every Christmas for her neighbours.

A few days before her 110th birthday, Ulla celebrated with over 20 family members, some travelling from as far away as Alaska and Hawaii to attend the party. She has three grandchildren by Peter.

Ulla Lund died in Waltham, Massachusetts, USA on 23 August 2017, at the age of 110 years, 29 days. She became the oldest living Danish-born person after the death of Ellen Brandenborg on 22 July 2017. 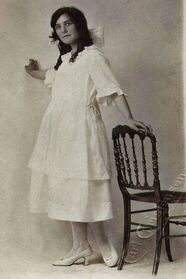 Ulla Lund at age 14.
Add a photo to this gallery

Retrieved from "https://gerontology.wikia.org/wiki/Ulla_Lund?oldid=160959"
Community content is available under CC-BY-SA unless otherwise noted.