Tome Tanaka (Japanese: 田中トメ; 21 September 1906 – 28 January 2019) was a Japanese supercentenarian whose age is currently unvalidated by the Gerontology Research Group (GRG). She was one of the oldest known living people in Miyagi Prefecture, Japan.

Tanaka’s husband founded the Tanaka Candy Store in Zao, Miyagi on 15 October 1947. The business has since grown into a confectionary franchise called the Sanzen Corporation, which maintains more than 70 stores and 460 employees. As noted in a 2010 blog post about Tanaka, her son (presumably Hiroto Tanaka) is currently the president of the corporation.

When asked about her longevity, Tanaka stated that she had never directed “bad feelings” at other people, and that she lived with “peace of mind.” 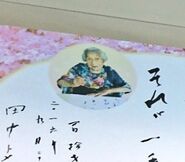 Tome Tanaka on her 110th birthday.

Images from Tome Tanaka’s 112th birthday.
Add a photo to this gallery
Retrieved from "https://gerontology.wikia.org/wiki/Tome_Tanaka?oldid=132852"
Community content is available under CC-BY-SA unless otherwise noted.