Lumby was born in the village of Harris, Saskatchewan, Canada on 7 November 1911, one of three children raised on a farm south of Saskatoon. The family spent several years in California before returning to the Prairies, where Lumby married a woman named Sadie in 1939, who would become an accomplished pianist. He would have one son with Sadie, Peter, who was aged 76 on Lumby's 109th birthday.

Lumby joined the Canadian military during World War Two. He would become a tank commander with the Lord Elgin Regiment. He saw service in The Netherlands, among the allies who crossed the Rhine. After the war, he served with the Allied Control Commission that ran post-war Germany, so he and his family resided in Dusseldorf from 1949 until 1952.

Following the war Lumby began work for CN, becoming head of the equivalent Human Resources, a position he would hold until retirement, aged 65 in 1977. In 2002, his wife died aged 90, following almost 70 years of marriage.

Lumby showed optimism into his centenarian years, he kept a car in the driveway until age 105, and still often orders seeds for "next spring". 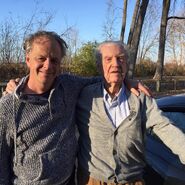 Lumby with his nephew Jeff Lumby