Thereza Favali Pocay (27 June 1904 – 20 October 2014) was a Brazilian supercentenarian whose age is currently unvalidated by the Gerontology Research Group (GRG).

Thereza Favali Pocay was born in Itapetininga, São Paulo, Brazil on 27 June 1904. Her parents were Paulo Favali and Maria Pereira Magalhaes. Thereza had two siblings: Italo and Amelia. During her childhood, her father died whilst his trip to Italy. Shortly after, her brother died of tetanus at the age of 7. Thereafter, along with her older sister, Pocay moved to their cousins and their maternal uncles: Dionysius and Adelina, who raised and educated them.

In their teens, Pocay and her sister chose the magisterium as a profession. They attended the normal course in the municipality of Itapetininga. Pocay successfully finished the course. In 1922, she obtained a Normalista diploma. She was named as a teacher by the decree on 10 February 1927, after which she came to live in the municipality of Salto Grande. Soon after, on 2 March 1927, she started teaching in the Escolas Reunidas of Salto Grande. In 1930, she married Arnaldo Pocay and had five children with him: Dalva Rute, Benedito Gentil, Arnaldo Jose, Luiz Carlos and Roberto Marcio. Even as a wife and a mother, Pocay didn't abandon her teaching profession. In 1958, after 31 years of teaching career, she retired. Pocay said: "I loved my profession and children as if they were my own (...) and today those children who saw me as the great teacher in size, grew, and I diminished in my size, I became small, but very thankful to God."

Pocay he worked as a social activist in Salto Grande for many years. In 1953, on invitation of her sister-in-law, Noemia Pocay, she joined the Progressive Social Party (PSP), winning the 1956 election and fulfilling her mandate until 1959. In 1981, she broke her femur and wasn't able to walk for a whole year. In 2011, the school where she had been teaching was named in her honor. 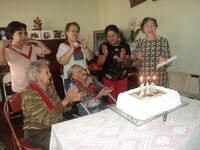 Thereza's 110th birthday
Add a photo to this gallery

Retrieved from "https://gerontology.wikia.org/wiki/Thereza_Favali_Pocay?oldid=116198"
Community content is available under CC-BY-SA unless otherwise noted.