Theresa Bernstein was born in Kraków, Austria-Hungary (now Kraków, Lesser Poland Voivodeship, Poland), on 1 March 1890. She was the only child of Jewish parents, Isidore and Anne (née Ferber) Bernstein, who emigrated to the United States when Theresa was two. She studied with Harriet Sartain, Elliott Daingerfield, Henry Snell, Daniel Garber and others at the Philadelphia School of Design for Women [1] now Moore College of Art & Design.

She graduated in 1911 with an award for general achievement (the college awarded her an honorary doctorate in 1992). After enrolling at the Art Students League in New York City, where she took life and portraiture classes with William Merritt Chase,[2] she traveled for a second time to Europe with her mother, her first trip abroad having been made in 1905. She admired Robert Henri's style of depicting the city's everyday drama.

In 1912 she settled in Manhattan. Her studio near Bryant Park and Times Square allowed her to paint a cross-section of New Yorkers; she also painted harbors, beaches, fish, and still-life. She and her husband William Meyerowitz lived for many decades in a rent-controlled loft-style studio apartment at 54 West 74th Street on the Upper West Side of Manh attan, just one block from Central Park West, and this studio was her home at the time of her death.

Bernstein was a member of the National Association of Women Artists and the North Shore Art Association. [1] Her works were exhibited extensively with the National Academy of Design and the Society of Independent Artists [3] (which she co-founded with John Sloan). Her work includes the oil on canvas mural titled The First Orchestra in America in the Manheim, Pennsylvania post office, commissioned by the Treasury Section of Fine Arts, and completed in 1938.[4]

Her husband was William Meyerowitz, also an artist. Following the death of their only child in infancy, the couple remained childless during their marriage.[1] Bernstein and Meyerowitz were quite close to two of their nieces who were both musicians, Laura Nyro and Barbara Meyerowitz (aka Barbara DeAngelis). Nyro and DeAngelis were supported in their musical educations by Bernstein and Meyerowitz. DeAngelis graduated from The Juilliard School of Music in the 1940s and enjoyed success as a songwriter, composer and teacher of piano and voice in New York and New Jersey. DeAngelis lived and taught piano and voice in Atlanta, Georgia from March 2010 until her death from a stroke in 2011.[5][6]

For many years, Bernstein's year of birth was subject to guesstimates and speculation, with sources varying from 1886 to 1895. Later, it was established that she was, in fact, born in 1890. Bernstein died at Mount Sinai Hospital in Manhattan, New York, New York, USA, on 13 February 2002, several weeks before her 112th birthday and several years after suffering a stroke. According to an original certificate issued by the Board of Public Education of the First School District of Pennsylvania (currently in the possession of Bernstein's great-nephew, Keith Carlson), Bernstein graduated from the William D. Kelley Elementary School in June 1907. Several of her paintings are on display at the Boca Raton Art Museum in Boca Raton, Florida.[5][6] 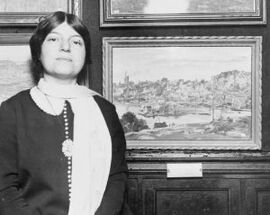 Theresa Bernstein-Meyerowitz in 1924 at age 34. 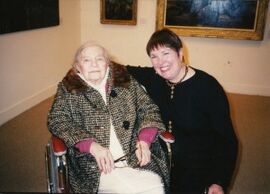 Theresa Bernstein-Meyerowitz at age 105 at the gallery of her paintings.