Teofila Gutierrez Jimenez (28 December 1907 – 15 November 2018) was a Spanish supercentenarian whose age is currently unvalidated by the Gerontology Research Group (GRG). She was the oldest known living person in the Spanish province of Toledo, until her death on 15 November 2018.

Teofila Gutierrez Jimenez was born on 28 December 1907 in Consuegra, Toledo, Spain. Her father, Santos, was one of the soldiers who defended the Spanish Empire in the Philippines during the Siege of Baler (1898–1899). Before going to the front, Santos was the boyfriend of Maria, the mother of Teofila. Her mother eventually met another man and they were preparing to get married. Santos eventually returned to the village of Consuegra and started relationship with Maria anew. They had five children; all of them (except Teofila herself) passed away before turning 40 years old. Teofila's mother passed away at the age of 100.

In 1932, she married Elviro Lomas Roco, who passed away in 1989. Elviro worked as a guard. During the Spanish Civil War, Elviro was sent to the front of Badajoz. Desperate, without news of her husband, Teofila took the bag and two of her children and went to look for him. They found him and allegedly, he lived in an abandoned train carriage. 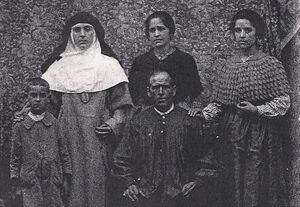 Teofila (in the center), with her father Santos and three of her relatives: Jose, Joaquina and Alejandra in 1921.
Add a photo to this gallery

Retrieved from "https://gerontology.wikia.org/wiki/Teofila_Gutierrez_Jimenez?oldid=108426"
Community content is available under CC-BY-SA unless otherwise noted.