Suwa Kondou (Japanese: 近藤すわ; 15 November 1897 – 22 January 2008) was a Japanese supercentenarian whose age has been validated by the Gerontology Research Group (GRG).

On 12 July 2006, following the death of Koyumi Inoue, Kondou became the oldest living person in Gifu Prefecture. Her age was verified by Japan’s MHLW and Stefan Gelow, and validated by the GRG on 15 February 2008. She lived at the Omotoen Nursing Home (Japanese: 万年青苑) in Ena. 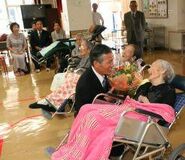 Kondou at the age of 109.
Add a photo to this gallery

Retrieved from "https://gerontology.wikia.org/wiki/Suwa_Kondou?oldid=172351"
Community content is available under CC-BY-SA unless otherwise noted.