Stella Mae Harriett Lennox (née Haraldson; 31 January 1908 – 6 December 2020) was an American supercentenarian who was the oldest known person living in the U.S. state of Illinois at the time of her death. Her age is currently unvalidated by the Gerontology Research Group (GRG).

Stella Lennox was born in Aneta, North Dakota, USA, on 31 January 1908. She was the oldest of six children born to Henry and Caroline (née Lang) Haraldson, who were of Swedish and Norwegian heritage. Her father opened the first car dealership in the area and was the town mayor for a time. Her family were reportedly the first in town to have a radio, and would host neighbours on Saturday nights to listen.

As a teenager, Lennox attended St. Luke’s Hospital in Fargo, North Dakota, for a three-year nurse’s training course. She graduated in 1930 and found a job as a teller at a bank for $50 a week. When residents of her town discovered that she was a trained nurse, they would come to the bank to ask for medical advice. She was sometimes summoned to tend to patients out in the country, and once had to deliver a woman’s baby by herself.

Lennox later moved to Chicago, Illinois, where she met her husband, Hugh. The couple married on 19 June 1932, and had two children, Willia and Jerry. Lennox received a certification in surgery assistance at Michael Reese Hospital, and in 1942, started working at Cook County Hospital, where she remained before retiring in 1969. She was also a Salvation Army volunteer for around 70 years.

After her husband died in 1986, Lennox continued to live in Chicago until she was 101, when she moved to Rockford, Illinois, to live with her granddaughter. On 6 March 2017, Lennox and her granddaughter were fortunate to escape alive after an electric blanket in their home caught fire at 4am. Lennox received minor burns but was able to recover in hospital. She said that she probably would not have survived the fire had the smoke alarm batteries not been changed the week before.

In October 2017, Lennox moved into a rehabilitation center in Rockford, Illinois. She died on 6 December 2020 at the age of 112 years, 310 days. At the time of her death, she had seven grandchildren (two of whom predeceased her), 16 great-grandchildren, and 17 great-great-grandchildren.

Stella Lennox as a young child

Stella Lennox as a nurse 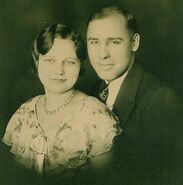 Stella Lennox with her soon-to-be husband 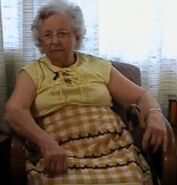 Stella Lennox around her 100th birthday

Stella Lennox at the age of 106 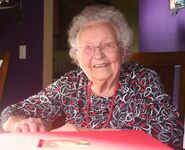 Stella Lennox at the age of 107

Stella Lennox at the age of 109

Stella Lennox at the age of 110 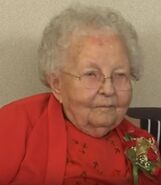 Retrieved from "https://gerontology.wikia.org/wiki/Stella_Lennox?oldid=157500"
Community content is available under CC-BY-SA unless otherwise noted.