Stelios Fragiadoulakis was born in 1912 in Agia Paraskevi, Irakleio, Crete, Greece. He was the child of George and Maria Fragiadoulakis. He had two brothers, Aristeidis and Giannis. At the age of 28 years old he was been called to arms and he participated in the 1940-1941 Greco-Italian War as member of the 5th Cretan Division. In the early June 1941 he finally achieved to return in his village. 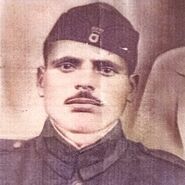