Sophie Hules (née Koenig; 14 June 1909 – 15 October 2020) was a Slovenian-born American supercentenarian whose age is currently unvalidated by the Gerontology Research Group (GRG). She may be, after surpassing the age of Katarina Marinic on 17 April 2020, the oldest person ever born in present-day Slovenia.

Hules was born Zofija (Sophie) Koenig in Konec (the name of the settlement was officially changed from Konec to Konca vas in 1952) near Kocevje, Austria-Hungary (present-day Slovenia) on 14 June 1909. Her parents were Josef and Gertrude Koenig. Her parents had traveled from their home in New York for a family gathering, but found themselves unable to return to the United States due to a combination of civil unrest, military conflict, and ultimately, the onset of World War I. It wasn’t until 1920, at the age of 11, that Sophie was able to return to the United States, which she and her family did aboard a steam ship originally built in 1912, named "The Presidente Wilson".

Her father Josef, mother Gertrude, sisters Rose and Louise, and two brothers, Josef and William left the farm they lived on to sail on the Presidente Wilson’s first trip to America after the war. They re-entered the United States like millions of immigrants, through Ellis Island, ultimately settling in Cleveland, Ohio. Sophie and her younger sister, Louise (born 14 June 1913), attended school together to learn English, and after six years of schooling, Sophie got a job, working as a Long Distance telephone operator.

Hules met a florist, James Hules, who was 7 years older than her. The couple got married six days prior to her 20th birthday. Nine years later, they set off for California, where Sophie worked the night shift as an operator for Pacific Telephone and Telegraph Company. James found work during World War II working for the government as a painting contractor, painting black out windows to prevent the enemy from seeing the lights in the houses.

The couple bought a house in South Pasadena, California, USA and raised three children there: Carol, Jim and Susan. Hules continued to work as a telephone operator, first taking the Red Line to work, eventually learning to drive herself to work. She also enjoyed driving to the beach, and regularly spent her vacation at Balboa Island or on Catalina. She retired from the phone company in 1966, though she continued to drive until the age of 94. After retiring, Hules became active in Senior Citizen’s groups, and did a lot of traveling. Her husband eventually became ill, and Sophie tended to his needs until his passing in 1983. She continued to travel, including trips to Hawaii, Paris, and the South of France.

Hules lived in the house she and James had shared in South Pasadena, tending to their gardens, until after the age of 100, but she moved into the British Home a couple years prior to her 104th birthday. Hules celebrated her 110th birthday in June 2019. 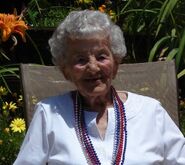