Sarah DeRemer Knauss (née Clark) (24 September 1880 – 30 December 1999) was a validated American supercentenarian who is the second-oldest validated person in history, behind only Jeanne Calment. She is the longest-lived person in the history of the United States, and was the oldest person in the world from the death of Marie-Louise Meilleur on 16 April 1998 until her own death on 30 December 1999.

Sarah DeRemer Clark was born in Hollywood, Pennsylvania, USA, a "mining patch" community that no longer exists, at a time when the now-famous Hollywood, California did not yet exist. She lived much of her life in Allentown, where she brought up her daughter Kathryn Sullivan (1903–2005).

There was also a history of longevity in her family: her paternal grandmother lived to be 98 and her cousin Minnie Kresge (1893–1999) lived to be 105. In addition, her daughter Kathryn Sullivan lived to the age of 101.

Knauss's longevity first came to light after the death of Jeanne Calment in 1997, when she and Marie-Louise Meilleur were first authenticated (previously, Mary Bidwell (1881–1996) had been believed to be the oldest American).

Knauss died rather abruptly sitting in her chair on the afternoon of 30 December 1999, survived by five generations of descendants. She died 33 hours before the year 2000. Some of her organs were bequeathed to the New England Centenarian Study, which did an autopsy. 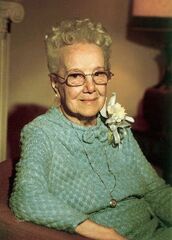 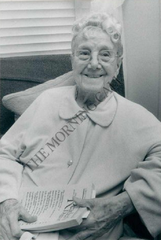 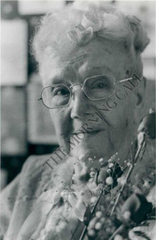 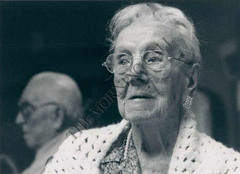 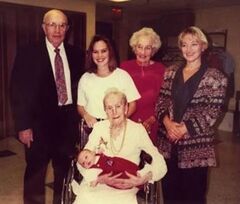 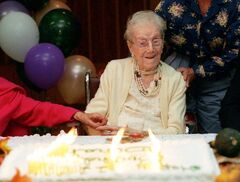 Sarah Knauss at age 119.
Add a photo to this gallery

Retrieved from "https://gerontology.wikia.org/wiki/Sarah_Knauss?oldid=112988"
Community content is available under CC-BY-SA unless otherwise noted.