Ruth R. Clark (née Bauder; 1 August 1899 – 6 December 2010) was an American supercentenarian whose age is validated by the Gerontology Research Group.

Ruth Clark was born Ruth Bauder in Harvard, Illinois, United States on 1 August 1899 to parents Chas A. and Sadie C. Bauder. At an early age, she became a member of the Methodist Church and served in the Sunday School and choir for many years.

She married Ralph L. Clark on 6 September 1920. They had three children: H. Kenneth, Gordon and Dorothy. Gordon died on 1 June 1952 after an accident. In 1960, Ruth moved to Sarasota, Florida and joined the Trinity United Methodist Church. She became a widow in 1990 when Ralph passed away after 70 years of marriage. 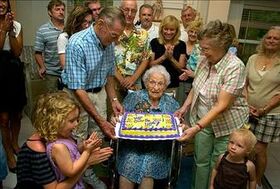 Retrieved from "https://gerontology.wikia.org/wiki/Ruth_Clark?oldid=169831"
Community content is available under CC-BY-SA unless otherwise noted.