Ruby Staley (née Snyder; born 8 June 1908) is an American supercentenarian who is the oldest known person living in the U.S. state of Maryland. Her age is currently unvalidated by the Gerontology Research Group.

Staley was born on 8 June 1908 in Halfway, Maryland, USA. She was one of eight siblings born to Eva and Clarence Snyder, and was raised in West Virginia, where they raised much of their own food. She moved back to Maryland with her family when she was 18. As of June 2020, only one of her siblings, Elizabeth Ridenour, who is in her 90s, is still living. Staley married Fern Staley in 1933, and were together for more than 50 years before his death in 1988.

After living in the same home for more than 80 years, Staley moved in to a retirement community in Williamsport, Maryland, in August 2015. She became a supercentenarian in June 2018. Due to the COVID-19 pandemic in 2020, Staley was unable to celebrate her 112th birthday in a normal fashion; family members who visited her were forced to stay separated by a special door, equipped with gloves, allowing a safe way to hug and hold hands. 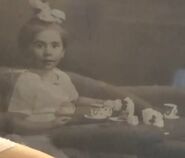 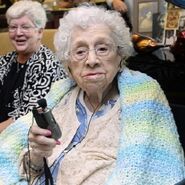 Retrieved from "https://gerontology.wikia.org/wiki/Ruby_Staley?oldid=157808"
Community content is available under CC-BY-SA unless otherwise noted.