Roger Fernand Auvin (20 March 1908 – 13 October 2019) was a French supercentenarian who was the oldest known living French male since the death of Georges Massard on 24 November 2016.

Roger Auvin was born in Champagne-le-Sec (Nouvelle-Aquitaine) as the eldest child in a family with 7 children (5 boys and 2 girls). He and his wife owned a grocery store in Limalonges. The couple had 2 sons, Jean-Claude (died in 2007) and Rémi. His wife died after 75 years of marriage in 2007.

At age 108, he was a bit hard of hearing, slept a lot and moved around in a wheelchair but still lived at home in Limalonges. He may have become the oldest man ever from the French region of Nouvelle-Aquitaine on 18 November 2018 after surpassing the age of Alexis Daigneau (1890–2001).

Roger Auvin died in Limalonges, Deux-Sevres, Nouvelle-Aquitaine, France on 13 October 2019 at the age of 111 years, 207 days. He had narrowly missed out on becoming the oldest man in Europe by approximately a week as Gustav Gerneth of Germany, who was reported to be at least two years older than him, died on 22 October 2019. As neither of him and Gerneth were validated, the title was unofficial during his time. 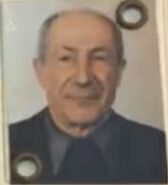 Roger Auvin in 1985
Add a photo to this gallery

Retrieved from "https://gerontology.wikia.org/wiki/Roger_Auvin?oldid=177155"
Community content is available under CC-BY-SA unless otherwise noted.