Jeanne Renee Deneuve (French: Renée; born 10 September 1911), known professionally as Renee-Jeanne Simonot, is a French centenarian, retired actress and voice artist. She is the widow of actor Maurice Dorleac, the mother of actresses Catherine Deneuve and Francoise Dorleac and the grandmother of actors Christian Vadim and Chiara Mastroianni.

Simonot was born in Le Havre, France to Joseph-Severe Deneuve and Antoinette-Jeanne Deneuve (née Schenardi). She debuted at the Odéon Theatre in 1918 at the age of seven. Primarily a stage actress, she remained there for 28 years, holding the post of "leading lady". Her daughter Catherine chose to use her maiden name, Deneuve, as her stage name. Simonot is Renée's stage name, which she took from an opera singer and family friend.

Simonot was one of the first French actresses to begin the dubbing of American films in France from the beginning of the talkies in 1929 through the 1930s. She was the voice of Olivia de Havilland (in most of her films), Sylvia Sidney, Judy Garland, Donna Reed and Esther Williams, among others.

She had her first daughter, Daniele, out of wedlock on 27 October 1936 with actor Aime Clariond.

Simonot has been a widow since 1979 and lives in Paris. In an interview conducted a few months before her 102nd birthday in 2013, she said: "My old age is not sad. I am lucky to be very surrounded. There is not a day where I don't get a phone call or a visit from my children and grandchildren."

In 2019, ahead of her 108th birthday, daughter Catherine told Gala: "It's pretty amazing, it comes from her genes. My sisters and I are holding her. She has been in a home for two or three years. At the same time it's a little scary, it still seems very far in life. I am all the more surprised by her longevity that she is not sick.

On 1 April 2020 at the age of 108 years, 204 days, Simonot became the the longest-lived French personality ever, after surpassing the previous record of Madame Simone.

As of May 2021, she is the oldest living retired actress in the world. 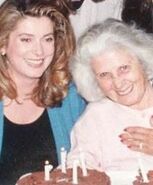 Renee Simonot in the 1980s with her daughter Catherine Deneuve. 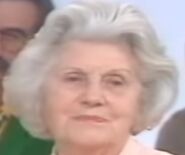 Renee Simonot in her centenarian years.
Add a photo to this gallery

Retrieved from "https://gerontology.wikia.org/wiki/Renee_Simonot?oldid=170461"
Community content is available under CC-BY-SA unless otherwise noted.