​Renata Bianchi-Pirini​ (16 October 1906 – 4 October 2019) was an Italian supercentenarian whose age is validated by the Gerontology Research Group (GRG).

Renata Bianchi was born in Cesena, Emilia-Romagna, Italy on 16 October 1906. In 1930, she married Umberto Pirini, who died in 1965. They had three children, two of whom died in infancy. She also had 18 nephews, from her ten brothers, who occasionally visited her.

In her later life, Bianchi lived alone in her own home in Cesena, Emilia-Romagna, Italy. She was visited every morning by social workers, who carried out household chores and did her shopping. She was also forced to have an operation to remove a tumour in her centenarian years.

Renata Bianchi sitting on the left with her sister, aged 20. 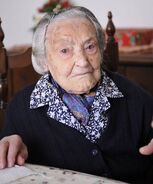 Renata Bianchi at 109.
Add a photo to this gallery

Retrieved from "https://gerontology.wikia.org/wiki/Renata_Bianchi?oldid=137992"
Community content is available under CC-BY-SA unless otherwise noted.