Dean was a minister at the United Reformed Churches in Wirksworth and Matlock,[4][7] and retired from the ministry at the age of 80.[1] He was an enthusiastic actor, singer, and amateur dramatist[5] and in 1987,[6] he helped found the Dalesmen Male Voice Choir, of which he was life president. Dean supported Fair trade and he helped create Traid Links, in Wirksworth.

Dean was married three times.[3] His first wife went into the cellar of a house where she was staying in for a short period of time and the other people in the house accidentally locked her in this cellar, making her unable to get out and causing her to die of hypothermia.[3] His third wife, Anne, was a colleague of his; they later divorced.[3] Anne is still alive today and later remarried.[3] Dean had a son named Christopher, born in either 1949 or 1950. He also had two grandchildren. Christopher Dean leads the Syd Lawrence Orchestra. One of his nephews was television presenter Nick Owen.

Dean was a vegetarian for thirty years. He attributed his vegetarianism, in addition to being lazy,[8] having good friends and a religion, and looking for the best in people, as the secret to his longevity.[2] Dean lived independently until 2007/2008, when he moved into a flat in Derbyshire.[5] He also mentioned just before his 110th birthday that when he lived in Mumbai just before World War I,[8] a doctor gave him a mysterious brown elixir ("this muddy mixture", as Dean called it)[8] and told him that "if [he would] drink this [he] will live forever" or that if he would "drink this [he'll] live until at least 100".[8]

On every birthday since his 100th, Dean began wearing a flower on his lapel.[5] Apart from sight problems,[5] Dean said at his 108th birthday that he was still in good health.[2] On his 109th birthday, Dean joked that "[he] thought [the Queen had] forgotten [him]" when his birthday telegram from the Queen that year arrived late.[5] Dean said on his 109th birthday that he still hoped to live to his 110th birthday next year,[6] which he did. However, he was unable to attend a celebratory concert held the previous evening, and also had to receive his cake in bed due to not feeling well recently.[1] 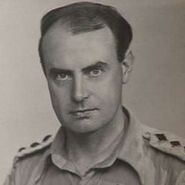 Retrieved from "https://gerontology.wikia.org/wiki/Reg_Dean?oldid=64723"
Community content is available under CC-BY-SA unless otherwise noted.