Ralph Burgess Tarrant (7 July 1903 – 30 October 2013)[1] was a British supercentenarian who, at the time of his death, was the oldest living man in the UK,[2] and the second oldest man in Europe, after Italian Arturo Licata .

Ralph Tarrant was born in Nottingham in 1903. He moved to Sheffield at the age of seven and left school when he was 13 in order to work. He initially worked at a local steelworks as an office boy, then worked as a steel inspector, and was a corporal in the Royal Air Force during World War II. He was then an insurance salesman for Refuge Assurance until his retirement in 1968.[2] He said that the secret to his long life "is to enjoy vices as well as much as virtues" and to "stay active and stay interested"[2]

Tarrant met his future wife, then known as Phyllis Mary Machen, in 1922.[2][3] They got married in Crookes, Sheffield, on 8 July 1933, one day after his 30th birthday. Tarrant and his wife did a large amount of travelling, and his favorite travel location was Capri, Italy, where he and his wife were able to swim with actress Gracie Fields. They also visited other European countries and the United States.[2]Phyllis died on 4 February 2011 at the age of 102.[3] Before her death, the couple were the United Kingdom's longest-married couple.[4] Tarrant has two daughters, Brenda and Christine, as well as seven grandchildren, eleven great-grandchildren and two great-great-grandchildren.[2] Tarrant smoked until he was 70 and was partial to whisky.[2][4] Beginning in January 2013, Tarrant lived independently in his two-bedroom flat, still cooked his own meals, did his own housework, and did some shopping.[2]

Tarrant became the oldest living man in the United Kingdom following the death of Reg Dean on 5 January 2013. Following Tarrant's death on 30 October 2013, the title passed to Harold Bracher (who was anonymous at the time), who was born on 30 November 1904.

Ralph on his 110th birthday

Ralph at an RAF training college in 1941 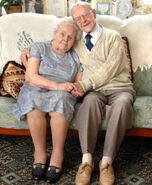 With his wife Phyllis
Add a photo to this gallery

Retrieved from "https://gerontology.wikia.org/wiki/Ralph_Tarrant?oldid=105816"
Community content is available under CC-BY-SA unless otherwise noted.