Pollyanna White was born in Hollywood, Alabama, USA on 23 August 1903 (claimed 1902). Her parents were Charlie Ellison and Minnie Ellison. She had 13 siblings. Her mother died when she was young.

She worked as a nurse for most of her life. She also worked as a Red Cross volunteer and was a member of the First Church of Nazarene. She was widowed in in 1998. In her very late 90s, she moved to Kankakee Kommons Assisted Living Center. 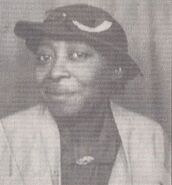 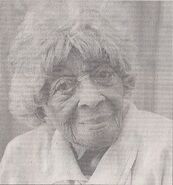 Pollyanna White in her centenarian years.
Add a photo to this gallery

Retrieved from "https://gerontology.wikia.org/wiki/Pollyanna_White?oldid=125128"
Community content is available under CC-BY-SA unless otherwise noted.