Peng was allegedly born on 7 August 1902 (according to some newspapers article, she was born in 1903, 9 years before the Republic of China) in the village of Jiamu, Wutai Township, Pingtung County, Empire of Japan (now Taiwan). At the age of 45, she moved to the village of Jingye in Sandimen Township.

Peng had 2 sons and 4 daughters. She was a devout Christian. She never drank alcohol. She belonged to the Rukai (Taiwanese indigenous) ethnic minority.

In December 2009, with her children and grandchildren, Peng voted to the election of Pingtung County magistrate, which opposed Cao Qihong to Zhou Dianlun [Chinese: 周典論].

Even in her centenarian years, she was able to take care of herself. At the claimed age of 111, she had a good eyesight and was able to read without glasses.

Peng died on 10 September 2016 at her home in the village of Jingye, Sandimen Township, Pingtung County, Taiwan at the claimed age of 114 years, 34 days. At the end of her life, she had more than 100 descendants.

Peng Yumei on her 108th birthday (107th birthday according to some sources). 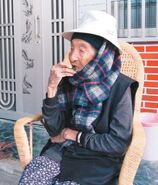 Retrieved from "https://gerontology.wikia.org/wiki/Peng_Yumei?oldid=173895"
Community content is available under CC-BY-SA unless otherwise noted.