Olive Riley (20 October 1899 – 12 July 2008) was an Australian centenarian who was the world's oldest online personal blogger and YouTube video poster at time of her death.

Olive Riley was born in Broken Hill, New South Wales, Australia on 20 October 1899. She was twice married, raised her three children on her own, and has worked as a barmaid and accountant.

She began her blog titled The Life of Riley (The title of her blog being a name-play on both her surname and the American 1940s radio serial, that was also adapted to television, a film and comic book (The Life of Riley) in February 2007 at the age of 107. She had posted over 70 entries, as well as several video posts on YouTube, in which she discusses both living through World War I and World War II, the years of The Great Depression, raising 3 children and working as a barmaid.

Her blog (or "blob" as she called it) began soon after the release of a film about her, All About Olive, directed by documentary filmmaker Michael Rubbo and released in 2005. Rubbo gave Olive a co-directing credit, making her the oldest director in the world, although this was never certified by any official body such as Guinness World Records. The blog was suggested by Eric Shackle, a journalist in his late eighties, who was interested in promoting the idea that one is never too old for the internet. Ruddo's other famous subject was the world's oldest person ever Jeanne Calment, whom was featured in Guinness World Records as the oldest actress having appeared "as herself" aged 114 in the film Vincent and Me.

Since Olive could not see well enough to type, Mike set up the blog for her and ran it for next two years with Eric's help, recording her stories, at first on audio and then later on video, to post over 100 YouTube items, all still visible today, as is her archive at mike.mikerubbo.com.

Olive Riley made her final post on 26 June 2008 from her Woy Woy nursing home complaining of a cough about two weeks before she died at the age of 108 years, 266 days. 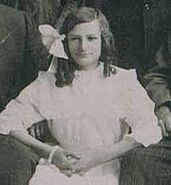 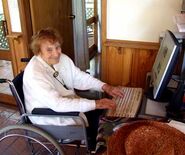 Olive Riley in her centenarian years