Olive Jean Myhre was born on 2 April 1912 in Gilbert Plains, Manitoba. She was the middle child to Fred and Catherine Clary, and only girl in a family of seven. She had three older brothers, Harry 7, Earl 5, and Alex, 3. George, Les and Bill were to come later.

The Clary farm was a mile and a half from the town. Olive was not born at home, but in the home of a local midwife, Mrs. Highland. Her early years were happily spent on a beautiful big farm where her father raised pigs so carefully that he cooked hot porridge for them each day. He raised horses, cows, foxes, chickens, geese, had beehives and grew grains crops each year.

Her father was the second man in the Gilbert Plains area to own a car – a one cylinder Reo. He bought it second hand from the first man to own it, a Mr. Green who decided to move back to England.[1]

Olive started school at the age of 6 and the ten-plus rural students were picked up by a horse-drawn van taking a circuitous 6 mile route into town to the six room school house. Her days were filled with activity, helping in the housework and kitchen after she got home from school. There were harvest gangs to cook for at harvest, farm hands to be fed and besides babysitting each new brother as they came along, Olive, along with her Mother was responsible to cook and tend. To this day, Olive recalls that she loved to bake bread. In winter, she loved to skate on an ice pond close to the railway tracks near their farm, and in summer, life on the farm provided many opportunities to enjoy the sunny outdoor weather.

In the winter of the year Olive was born, there was a virulent outbreak of scarlet fever which took the lives of 14 people. She also lived through the Spanish Flu in 1919.[1]

Church has always remained a very important part of Olive’s life. She can recall Rev. T. T. Latto’s influence on her life. He was a former Methodist minister, who had experienced a great revival and as a result the Full Gospel Church of Gilbert Plains was formed. The first meeting was under the trees in the Agricultural Fair Grounds, the second in the Orange hall, then to a room over top of a local business. In 1925, the church was built.[1] She also experienced an amazing miracle with God miraculously restoring her deaf ear.

There was a good number of young people in the congregation and 14 of them attended Western Pentecostal Bible College in Winnipeg, Manitoba. Many of them eventually went into ordained or mission ministry. Olive attended in 1932, completing two years of study. In the summertime, the college students often ministered at summer placements and Olive, along with Ruby Delgatty pastored at Shoal Lake. At the end of the summer of 1932, the congregation could not find a replacement, so Olive remained, and Sadie Baycroft joined her in ministry there. In 1933, Olive became a licensed Ladyworker with the Pentecostal Assemblies of Canada.

Olive married Cyrus Alford Lerud Myhre, in 1934. Cyrus was an American from Minneapolis whom she met at Bible College. Their first pastorate was in Swan River, Manitoba. This was the first of many in the following years: Croll, Rocanville, Ruthilda, Springwater. These were places where the income was meager, prairie winters cold and bleak, and the main means of transportation was horse and buggy during the summer months, and horse and toboggan sleigh in the winter.

All through the years Olive was deeply involved in ministry alongside her husband – they were a team. She led in worship at every service – often three services a Sunday. Together, they frequently visited the people in the community and congregation; she taught Sunday School; preached occasionally; was always ready to pray with people in the prayer room as they sought the infilling of the Spirit, needed salvation or healing.

Olive was the ultimate hostess often making meals for those who came to the door for a handout, entertaining different families of the congregation and hosting visiting evangelists and missionaries, and District Superintendents. She attended camp meetings, tent revivals, PAOC conventions, WMC meetings and rallies.

It was the Canadian prairies in the 1940’s – a nationwide depression had been in play, and in this environment, Olive and Cyrus labored teaching God’s word. Cyrus was a great Bible teacher, and while they were pastoring Viscount, they were called by telegraph message to the east coast where Cyrus became the Principal of the Atlantic Bible College and Olive, the Dean of Women.

Again, there was no promised salary, and many times over, Olive has testified as to how God provided for them and their two children Wayne and Donna. Eventually the Myhre’s moved to Edmonton where Olive’s husband was on staff at Canadian Northwest Bible College led by Rev. D.N. Buntain. In years to come they would pastor Wainwright Alberta, and in B.C. - Creston, Chilliwack, Prince Rupert, Giscome and then supplying in ministry at different places during their retirement years.

In 1994 Olive's husband, Cyrus, went home to be with the Lord. In 1996, Olive lost her only daughter, Donna, to cancer, leaving her alone in B.C. because her son Wayne and his family lived in Ontario. They invited her to move to Ontario to be closer to her family, so in November of 1996, Olive moved into Shepherd Village in Toronto, Ontario. She loves living in Shepherd Village, loving her friends and newfound friends (as she has lost so many of her former friends and colleagues.) She appreciates the kindness of all the staff members who assist her with such tender loving care.

Her favorite Scripture verse is Isaiah 26:3 “Thou wilt keep him in perfect peace, whose mind is stayed on thee, because he trusteth in thee.” 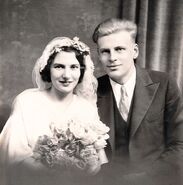 Cyrus and Olive Myhre married in 1934 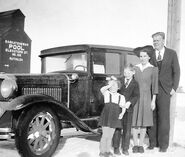 Olive Myhre's 108th birthday on April 2, 2020 with staff from Shepherds Village in Toronto Ontario during the COVID-19 Pandemic Lockdown 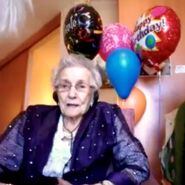 Retrieved from "https://gerontology.wikia.org/wiki/Olive_Myhre?oldid=168569"
Community content is available under CC-BY-SA unless otherwise noted.