Washington was born in Napoleonville, Louisiana, USA on 24 June 1909. Her parents were Louis Clark Sr. and Florence Miles. She was the oldest child and had at least 11 younger siblings: Mary (died in 2004), Juanita (died in 2018), Willie, Louis, Freddie, Eula, Horace, David, LC, Almatha and Elizabeth. In the 1920s, she married Lonnie Washington, from Donaldsonville, Louisiana, and they owned Starlight Cafe and Hotel in Gert Town (New Orleans). She never had children, but raised her nephew, Willie Clark from the time he was 2 years old in 1939, and his sister, Willie Mae Griffin (deceased as of 2018), who was 7 years old at that time.

Her husband died in the 1980s. Washington lived in New Orleans, Louisiana for 80 years before moving to Belle Vie where she has lived since she broke her hip in 2008 and went there for rehab. Her youngest brother, Louis Clark Jr., pastor of St. John Baptist Church in Napoleonville, was still alive in 2018 and attended her 109th birthday party.

Washington died in Belle Vie Living Center in Gretna, Louisiana, United States on 10 August 2020 at the age of 111 years, 47 days. 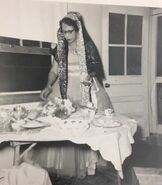 Early life.
Add a photo to this gallery

Retrieved from "https://gerontology.wikia.org/wiki/Odile_Washington?oldid=145505"
Community content is available under CC-BY-SA unless otherwise noted.