In her centenarian years, she lived at the "Fondation Elisa" nursing home in Geispolsheim. She was the doyenne of the Communauté urbaine de Strasbourg. She enjoyed completing puzzles, which she collected in her room. She celebrated her 110th birthday in March 2013. Her age was verified by Cyril Depoudent and Antoine Demarais, and validated by the GRG on 2 April 2015.

Colin died in Geispolsheim, Bas-Rhin, Grand Est, France, on 9 April 2014, at the age of 111 years, 12 days. She was the sixth-oldest living person in France at the time of her death (behind Marie Liguinen, Olympe Amaury, Eudoxie Baboul, Jeanne Bournat and Therese Ladigue). She was also the oldest living person in Grand Est region; her successor was 110-year-old Henriette Boeuf. 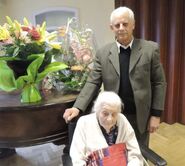 Colin on her 110th birthday.
Add a photo to this gallery

Retrieved from "https://gerontology.wikia.org/wiki/Odette_Colin?oldid=163565"
Community content is available under CC-BY-SA unless otherwise noted.