Norman Lloyd (born Norman Perlmutter; 8 November 1914) is an American actor, producer and director with a career in entertainment spanning nine decades. As one of just a few surviving performers of the Golden Age of Hollywood, he is currently the oldest living actor in the world.

Norman Lloyd was born Norman Perlmutter in Jersey City, New Jersey, USA on 8 November 1914. His family was Jewish and lived in Brooklyn, New York. His father, Max Perlmutter (1890–1945), was an accountant who later became a salesman and proprietor of a furniture store. His mother, Sadie Horowitz Perlmutter (1892–1987), was a bookkeeper and housewife. She had a good voice and a lifelong interest in the theatre, and she took her young son to singing and dancing lessons. He had two sisters, Ruth (1918-1962) and Janice (b. 1923). Lloyd became a child performer, appearing at vaudeville benefits and women's clubs, and was a professional by the age of nine.

Lloyd began practicing his lifelong hobby of tennis at the age of eight. "With the application and time I have devoted to it, I should have been a reigning World Champion", he said in a 2000 interview. His opponents have included Charlie Chaplin, Joseph Cotten and Spencer Tracy. Lloyd was still playing twice a week until July 2015, when he had a fall. He stopped driving in 2014 at his son's insistence.

Lloyd turned 100 on November 8, 2014. Both of Norman Lloyd's longtime friends and understudies, Ed Begley, Jr. and Howie Mandel (who both co-starred opposite Lloyd on St. Elsewhere) reflected on his centenarian celebration; Begley, Jr. said: "I worked with Norman Lloyd the actor and Norman Lloyd the director, and no one informed me better on the art of storytelling than that talented man. He is a constant inspiration, and my eternal friend"; and Mandel said, "I love Norman Lloyd. He is a legend. I have spent hours like a little kid while he regaled us with stories of Hitchcock. He teaches, he entertains. He is a legend."

Norman Lloyd currently lives in California, USA at the age of 106 years, 162 days. 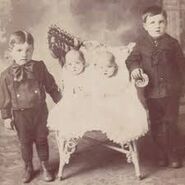 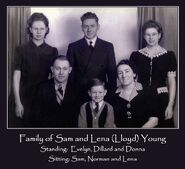 Norman Lloyd (standing) as a young man with his family.

Norman Lloyd in a movie as a younger man. 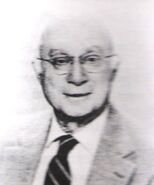 Norman Lloyd at the age of 77.

Norman Lloyd at the age of 99.

Norman Lloyd on his 103rd birthday.

Norman Lloyd on his 106th birthday.
Add a photo to this gallery

Retrieved from "https://gerontology.wikia.org/wiki/Norman_Lloyd?oldid=165014"
Community content is available under CC-BY-SA unless otherwise noted.