Norma Eugenia Schofield (née Smith; 12 September 1912 – 21 November 2020) was an American centenarian who is one of the oldest known survivors of COVID-19, having recovered from the disease at the age of 107. She also recovered from the Spanish Flu more than a century beforehand, making her one of a small number of people to have survived contracting both diseases.

Norma Schofield was born in Leominster, Massachusetts, USA on 12 September 1912. Her parents were George Smith (1891–1972) and Beatrice Smith (née Smith; 1891–1995), who lived to be 103. She survived the Spanish Flu when she was six years-old; her whole family also caught it and were quarantined.

Schofield went to the gym three times a week until she was 99. Her family had a camp on Lake Winnipesaukee in New Hampshire, and until she turned 100, she would swim up and down the shore every day that they were there.

In 2020, at the age of 107, Schofield contracted COVID-19 during the coronavirus pandemic. However, she had successfully recovered by the time of her 108th birthday on 12 September, making her one of the oldest known survivors of the disease. 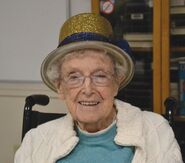 Norma Schofield on her 105th birthday.

Norma Schofield on her 106th birthday.

Norma Schofield on her 108th birthday.
Add a photo to this gallery

Retrieved from "https://gerontology.wikia.org/wiki/Norma_Schofield?oldid=156239"
Community content is available under CC-BY-SA unless otherwise noted.