Dragos was born in Griblje near Crnomelj (present-day Slovenia; Austro-Hungarian Empire at the time of his birth), the ninth of 12 children to Ivan and Barbara Dragos. He finished primary school in Griblje. [1][2] As a young man, he was a good skier, winning the Yugoslav military skiing competition.[2]

Dragos found a job in the Yugoslav military and was sent to a Yugoslav-Bulgarian border in present-day Serbia as a border guard. Later he became a head of the border patrol. At the outbreak of WWII, he was captured by the Germans and sent to a prisoner of war camp in present-day Austria, where he remained until the end of the war.[1][2] After the war, he found a job in the Yugoslav police where he worked primarily as a record clerk. He retired in 1965.[3]

Dragos married in 1947. He had two children, a son and a daughter.[1][2]. At the request of his family, he wrote an autobiography, entitled Mojih sto let (My one hundred years) which was published in 2007.[2] He also played musical instruments throughout his life, and still played tamboura and guitar even as a centenarian.[2] He lived at home in Ljubljana, before moving in to a retirement home at the age of 101.

Niko Dragos with his wife on his wedding day in 1947. 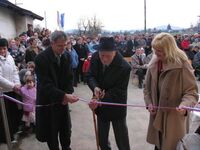 Niko Dragos at the age of 108.
Add a photo to this gallery

Retrieved from "https://gerontology.wikia.org/wiki/Niko_Dragos?oldid=137862"
Community content is available under CC-BY-SA unless otherwise noted.