Namie Takaki was born on 11 October 1908 in Japan. She moved to Taiwan with her father at a young age. Takaki worked as an elementary school teacher in Taichung, Taiwan, before World War II, when the island was under Japanese rule. She returned to Japan in 1939 after teaching for about ten years.

In 2017, Takaki received a letter of appreciation from Taiwan for her contributions to modern Taiwanese education.

Takaki became a supercentenarian in October 2018. In September 2019, she was reported as the second-oldest person in Kumamoto Prefecture, behind Chie Ogata of Minamata. 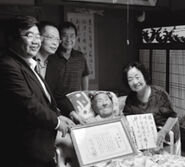 Retrieved from "https://gerontology.wikia.org/wiki/Namie_Takaki?oldid=121821"
Community content is available under CC-BY-SA unless otherwise noted.