Mary "Mollie" Walker, MBE (née Hybart; born 5 February 1909) is a British supercentenarian whose age is currently unvalidated by the Gerontology Research Group. She is currently the oldest living person in the United Kingdom, following the death of Gertrude Kingston.

Mollie Walker was born in Cadoxton, Wales, UK, on 5 February 1909. Her first car was an Austin 7, which she acquired aged 17. Walker drove many types of vehicle and taught many people to drive throughout her life. She drove until the age of 103. She married John Walker in 1931, and they had two children: Sheila and Graham.

During World War II, Walker served in the Women’s Voluntary Service (WVS). From 1954 to 1979, she worked for Peppard Parish Council. She was later awarded an Order of the British Empire (MBE) for her work in the Civil Defence.

Walker became the oldest living person in the United Kingdom following the death of Gertrude Kingston on 28 July 2021.

Walker currently lives in Kingwood, Oxfordshire, England, in the house that she and her husband built in the 1930s. 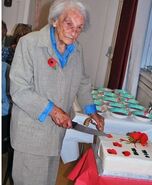