In September 2014, she was reported as the third-oldest living person in Ehime Prefecture, after Yoneno Kouno and Hikari Kataoka. In October 2014, at the age of 110, she was visited by the Mayor of Saijo, Masaru Aono. At that time, she lived in Akeyashiki, Saijo. Following the death of Kataoka in February 2015, she became the second-oldest living person in Ehime Prefecture. 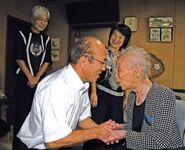