Meta Berndt (9 November 1889 – 28 December 2001) was a validated German supercentenarian. She was born in Kawcze (at the time Kaffzig in the Prussian province of Pomerania, German Empire, today Poland) and died in Düsseldorf. At the time of her death at 112 years, 49 days, she was the oldest living person in Germany. She is among only seven validated people in history who have reached the age of 112 years in Germany.[1]

Meta Berndt was one of twelve siblings. Her father was a farm owner in Kawcze in Pomerania, which at that times belonged to the German Empire. Berndt's father died in 1906. Later, she spent several years with her cousin in Sopot. After the political changes upon the end of World War II, Mrs. Berndt migrated with her family to Thuringia, Germany in 1947. Thereafter she lived in Ilfeld, Hannover and Mettmann. In 1960, Berndt's mother died at 95 years of age.

In 1966, Meta Berndt moved to Düsseldorf, Nordrhein-Westfalen, to live with her niece. Reportedly, she was a supporter of CDU and Helmut Kohl.[2] 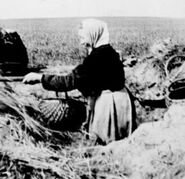 Meta Berndt at her niece's home at age 95. 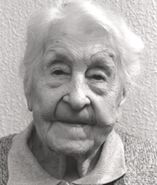