Merle Emmeline Barwis (née Stedwell) (23 December 1900 – 22 November 2014) was an American-Canadian supercentenarian who was, at the time of her death aged 113 years, 334 days, the oldest living resident of Canada and one of oldest people ever in Canada. She became the oldest living person in Canada from the death of Cora Hansen on 18 April 2012, until her own death 2 years and 7 months later.

She outlived her two sons and two of her 10 grandchildren. At the time of her death, she had 17 great-grandchildren.

She died on 22 November 2014 at the age of 113 years, 334 days. At the time of her death she was the fourth-longest lived person ever in Canada and the oldest person ever to live in British Columbia. 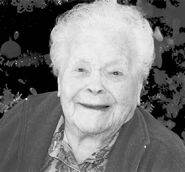 Retrieved from "https://gerontology.wikia.org/wiki/Merle_Barwis?oldid=172971"
Community content is available under CC-BY-SA unless otherwise noted.