Melville Uriah Williams (born 21 February 1910) is a Barbadian supercentenarian whose age is currently unvalidated by the Gerontology Research Group (GRG). He is the oldest (known) living person in Barbados according to the Barbados Government Information Service.

Melville was born on 21 February 1910 to Napoleon and Mariah Williams. His father who was also a saddler, was a prominent and prestigious worker at several plantations. Williams came into his craft from a young age, by becoming the protégé of his father’s main assistants, who taught him the intricacies of the craft. He later became his father’s most dexterous worker and was employed at every plantation in St. Lucy, St. Andrew and St. Peter. As an accomplished saddler and entrepreneur, he produced saddles and harnesses to outfit horses for buggies, donkey carts and tralalas, as well as bridles and collars for race horses. He found employment in places as far as New York and Pennsylvania, and in Trinidad for the Police Force, where he was renowned for his skill.

After lengthy employment abroad, Williams returned to Barbados in his later years with the intention of sharing his knowledge and skills by teaching others the art of making saddles and other apparel for horses, to keep the manual art of the trade alive. He has nine children: seven daughters and two sons. In his early centenarians years, he was still making and selling saddles, and was capable of walking places without the aid of a cane. However, on his 107th birthday he mentioned having some increased difficulty walking, but stated that his memory was still sharp. He was also reported to have maintained his full independence at 107, even paying his own bills. His eyesight was also said to be exceptionally good for his age, allowing him to read the daily newspaper without glasses. He continued to walk around his home with the aid of a cane until he was 109, before he finally began using a wheelchair.

Williams currently lives in Lonesome Hill, Saint Peter, Barbados, at the age of 111 years, 114 days. He is currently the 3rd-oldest known person ever from Barbados, behind Millicent Yearwood and James Sisnett. 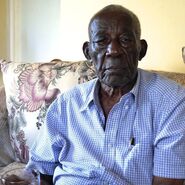 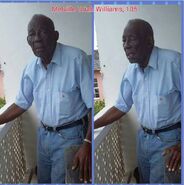 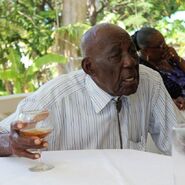 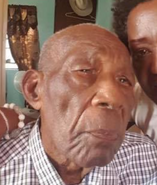 Aged 110.
Add a photo to this gallery

Retrieved from "https://gerontology.wikia.org/wiki/Melville_Williams?oldid=172589"
Community content is available under CC-BY-SA unless otherwise noted.