Winifred May Willis (born 18 March 1910) is a British supercentenarian whose age is currently unvalidated by the Gerontology Research Group.

Willis married her husband, Fred, in 1933, and they had one daughter, Vera. They were married for 57 years and spent much of their marriage living in Orpington, Kent, England. Willis had a passion for gardening and playing bridge. She and her husband also loved dogs, and over the years they had three German shepherds and several rescue dogs.

In 1971, Willis and her husband moved to a bungalow in Bexhill-on-Sea, East Sussex, England. After husband's death, she moved in to a nearby apartment, where she still lives independently. On her 110th birthday in March 2020, she stated that she never smoked or drank alcohol and has "enjoyed every minute" of her life.

In February 2021, a month before her 111th birthday, Willis stated that she had been given a vaccination against COVID-19, and encouraged others to get one too.

Willis as a young woman 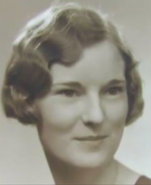 Willis as a young woman

Willis as a younger woman

Retrieved from "https://gerontology.wikia.org/wiki/May_Willis?oldid=163425"
Community content is available under CC-BY-SA unless otherwise noted.