Maude Florence Harris (née Juelson; born 15 August 1907) is an American supercentenarian who is currently the oldest known person living in the U.S. state of Florida. She is also the second-oldest living person in the United States, after Thelma Sutcliffe of Nebraska. However, she is not the second-oldest living American-born person, since Maria Branyas Morera of Spain is older. Harris also holds the record for being the oldest woman to have ever been born in the U.S. state of Minnesota, and is the second-oldest person ever born in the state, after Walter Breuning. Her age is validated by the Gerontology Research Group (GRG).

In 1938, she married Guy Harris in King County, Washington, USA. They had no children at the time of the 1940 US Census.

At the age of 103, Harris was reported to be quite active, and knitted hats and sweaters for premature babies born at Jackson Memorial Hospital. Her age was validated by the GRG on 17 November 2019. She currently lives in a retirement community in Hialeah, Florida, USA, at the age of 114 years, 67 days and is the oldest living Floridian. 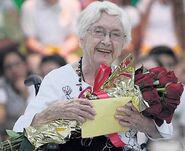 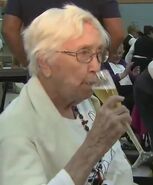 Maude Harris on her 107th birthday.