Matilde Gentili-Coulter (30 March 1909 – 19 January 2021) was an Italian-born British supercentenarian who, at the time of her death, was the oldest living person born in Italy. Her age is currently unvalidated by the Gerontology Research Group.

Coulter was born in Bovino, Apulia, Italy, on 30 March 1909. She was one of four siblings, and her father died when she was ten years old. Soon after, she moved to Rome where she lived with an aunt at a French covenant school. A few years later, she married Cliff Coulter, a British man who worked at Fox Films in Rome. She began working in the accounts department at the company, before the couple moved to England when the Second World War broke out.

The couple spent the duration of the war in Northamptonshire, England, before returning to Italy. Cliff Coulter died in 1959, and Matilde stayed in Italy with her extended family. However, she would often make trips back to England where she would stay with her son, John, and his family.

To celebrate her 100th birthday, Coulter travelled by plane to the UK to celebrate her birthday at the Luton Hoo hotel. At the age of 103, she moved permanently to live with John and his wife in Hatfield, Hertfordshire, England. A few years later she moved to Shenley, Hertfordshire, England, where she celebrated her 110th birthday in March 2019. Following the death of Erminia Bianchini on 23 June 2020, Coulter became the oldest living Italian-born person, being 17 days older than Maria Oliva who is the oldest person living in Italy. 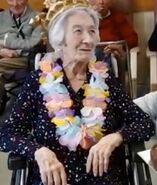 Retrieved from "https://gerontology.wikia.org/wiki/Matilde_Coulter?oldid=160701"
Community content is available under CC-BY-SA unless otherwise noted.