Mary Carmen Camerlengo (26 November 1902 – 20 January 2013) was an American supercentenarian whose age is validated by the Gerontology Research Group (GRG).

Mary Camerlengo was born in Boston, Massachusetts, USA on 26 November 1902. Her parents were Raphael Camerlengo and Anna (née Piscopo) Camerlengo. She had 12 siblings. She never married and had no children.

Mary and her sister Annie moved from West Roxbury, Massachusetts to Deltona in 1974, where Mary lived in her home until she was 103, insisting upon doing her own gardening and housework. At 98, Mary horrified a family member when she indicated she was going to buy a chainsaw so she could trim her own trees.

Mary Camerlengo died in DeLand, Florida, USA on 20 January 2013 at the age of 110 years, 55 days. She is survived by her niece Alberta Mason and numerous other nephews and nieces. 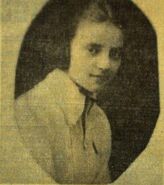 Mary Camerlengo as a young woman.

Mary Camerlengo on her 107th birthday.

Mary Camerlengo on her 110th birthday.