Marion Higgins (née Bigelow; 26 June 1893 – 2 March 2006) was an American supercentenarian whose age is validated by the Gerontology Research Group.

Marion Bigelow was born in Williamsville, New York on 26 June 1893. She was raised first on a farm in Maine and then on farms in Ohio, Michigan and finally Idaho, where she graduated from high school. She then went to what is now the University of Puget Sound in Tacoma, Washington, where she earned her bachelor’s degree and a teaching credential, before taking a faculty job at a one-room schoolhouse in Cascade, Idaho.

Higgins married John Higgins in 1918, and she continued to teach while raising three children. One of her sons was born with a deformed leg that made movement in the snow difficult, so in 1927 the family moved to Pomona, California, because of the better weather.

During World War II, Higgins worked in the BF Goodrich plant in Pomona, where she made de-icers for the tails of B-17 bombers. Four years after the war ended, her husband died from a heart attack, aged 60. She didn't remarry.

Higgins had a career with the Los Angeles County assessor’s office from 1947 to 1963, when she was forced to retire at the age of 70. After her retirement, she sang with a choral group called the Ontario Oratorio for 15 years. She was also an active member of her church.

Higgins became the oldest living person in California following the death of Margaret Russell on 29 May 2005. Her eldest son, John, also died that month. In June 2005, in preparation for her 112th birthday, she was interviewed by Andrew H. Malcolm, a Feature Writer from The Los Angeles Times, and L. Stephen Coles, founder of the Gerontology Research Group. In November 2005, she published a collection of her short stories.

Marion Higgins on her 110th birthday. 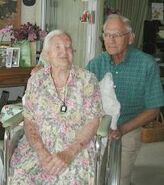 Marion Higgins and her son Horace Higgins in July 2013. 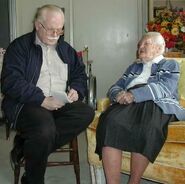