Marija Bibulic [Croatian: Bibulić] (née Paris; 5 June 1913 – 16 April 2021) was a Croatian centenarian who was the oldest known living person in Croatia at the time of her death.

Marija Bibulic was born in Vabriga, Istria County, Austria-Hungary (now Croatia) on 5 June 1913. Her father was killed in the World War I in 1916, after which her mother remarried. One of her sisters died at age 19.

In 1943, during the World War II, the germans took her husband, first to Trieste to the infamous Coroneo prison, and from there to the German camp of Dachau where he died in 1945. He died, according to survivors, a few days before the americans entered the camp on 29 April.

After her husband died, she worked as farmer. In 1962, she was awarded the Medal of Merit for the People by the President of Yugoslavia Josip Broz Tito. In 1985, her son Ivan died at the age of 44 in a car accident. She also outlived her grandson Olijan.

In her later years, Bibulic lived with her daughter-in-law Slavica and her granddaughter Vesna in Poreč, Istria County, Croatia. She died in this town at the age of 107 years, 315 days. 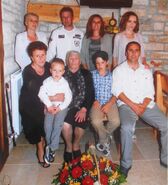 Marija Bibulic on her 100th birthday with her family.

Marija Bibulic on her 104th birthday.

Marija Bibulic with Red Cross of Poreč in March 2020.
Add a photo to this gallery

Retrieved from "https://gerontology.wikia.org/wiki/Marija_Bibulic?oldid=169065"
Community content is available under CC-BY-SA unless otherwise noted.