Marie-Louise Meilleur (née Chasse; 29 August 1880 – 16 April 1998) is the verified Canadian longevity recordholder. After the death of Jeanne Calment, Marie-Louise became the oldest living person of the world. Marie-Louise is currently ranked as the 5th-oldest validated person of all time.

Marie-Louise Febronie Chasse was born in Kamouraska, Quebec, in 1880, to fisherman parents. According to her family, she had some Native American ancestry.[1] At the age of 18, she married Gerard Leclerc, another fisherman of her village.[2] After he, two of her children and both of her parents died in 1911 and 1912, Meilleur left two of her four surviving children in 1913 and moved to the rural Ontario border. Only once, in 1939, did she return to the Quebec area.[3] She married in 1915 Hector Meilleur, a Franco-Ontarian woodcutter, and with him, she had another 6 children. She lived in Deep River. At 107 years old, she left to a nursing home in East Ferris.[4] At the age of 110 Meilleur was still able to walk without assistance.

Marie-Louise lived on a wood house without electricity and hot water until the 1950's.[5] Some sources said that she was vegetarian, but this is not confirmed. Marie-Louise smoked Tobacco until her 90's.

She attributed her longevity to "Hard work, remember the good times of her youth, loved her family, having a good sense of humor and having good faith to God and Mary".

After Lillian Ross died in 1993, Marie-Louise became the oldest living person in Canada.

After Marie-Louise died at the age of 117 years, 230 days, from a blood clot in East Ferris, Ontario, Sarah Knauss succeeded her as the oldest validated living person in the world.

For almost 20 years, Marie-Louise sustained her rank as the 4th-oldest validated person of all time unbroken until Nabi Tajima of Japan surpassed her age on 23 March 2018. 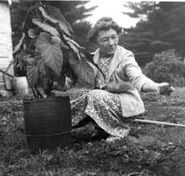 Marie-Louise Meilleur in the 1960s with husband Hector Meilleur.